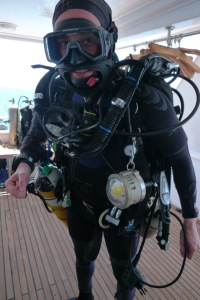 Doug Anderson , technical advisor at Orcalight, on location talking about the Seawolf 2260.

Doug Anderson is a Wildlife Cameraman, specialising in underwater Film and Video.  He has worked worldwide creating sequences for award winning BBC series such as “The Blue Planet”, “Planet Earth” and “Life”.

From 2008-2010 Doug worked almost exclusively on the recently broadcast landmark BBC / Discovery series “Frozen Planet”. In two seasons Doug spent over 6 months in the Antarctic recording brand new Killer Whale behaviour on the Peninsula and filming underwater life beneath the sea-ice at the foot of the Ross Ice Shelf. Since 2012 Doug has been involved testing equipment for BBC Natural History Unit’s first foray into 3D feature films – an African project called “Enchanted Kingdoms” for which the underwater acquisition has started in the Red Sea.

Driven by a desire to create the best possible images Doug works with the latest technologies finding solutions in the most challenging situations. “I am very excited to have the opportunity to be heavily involved in the design of solutions to the problems and inhibitors that limit underwater exploration and cinematography, for both the professional and recreational diver”. To find out more about Doug, you can visit his web site at www.doug-anderson.com.